A Pokémon RPG too huge for one board

The Adventure Begins For Alex!

The Adventure Begins For Alex!

Alex was running down the dirt road from his house in Littleroot Town, Hoenn, to Prof. Birch's Lab to receive his very first Pokémon. He had lived in Littleroot his whole life, and today, it was finally time to leave his home and explore the land of Hoenn with his very own Pokémon, and maybe, just maybe, he could conquer the Pokémon League.

Alex finally made it to the lab, after huffing and puffing his way here. He could hardly hold his excitement, and without hesitation, swung open the doors to the lab and let out a loud "Yippee!" before making his way over to a table in the center of the lad which held all of the Pokémon. He had his heart set on getting a grass Pokémon since it was his favorite Pokémon, and after scanning over the Pokémon for a short while finally decided on a Pokémon, guessing it was a Grass type due to the shade of green all over it's body.

"Alright, you're going to be my first Pokémon!" cried Alex.

He sent out his Pokémon, who stared at him shortly, with a puzzled look.

"I'm Alexander Kagura, and I love grass types! You'll be my partner and together we'll take out every trainer who opposes us!" yelled Alex.

Treecko, who was now filled with excitement from his new trainers words, hopped on his shoulder and sat, quickly forming a bond with him. 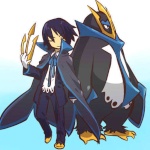 Professor Birch had heard the door slam, but before he could get into the room, he had already found yet another new trainer holding on to his newest friend. Birch grumbles a bit, but ends up smiling as he turns to the new trainer.

"Well hello there, I've noticed that you have picked up one of my Treecko- but either way, I've already met many trainers that were just as excited as you are to get their Pokémon, so it's alright. But may i ask of your name, if only to be able to register this PokéDex to you?"

Professor Birch waits, grinning at the antics between Treecko and Alex, but not saying anything else.

"Oh, sorry, I was so jazzed to get my Pokémon that I forgot you were even here," laughed Alex. "Anyway, my names Alexander Kagura, but everyone just calls me Alex. I've been wanting to go on a journey with a Pokémon for a long time, but I haven't been able to. Over protective mom, y'know? Anyway, Me and Treecko will make a good pair, I'm totally in touch with almost every grass Pokémon I meet," blurted Alex.

He watched as Treecko jumped down from his shoulder and gave the Professor a nod, which Alex assumed he approved of his new trainer.

Professor Birch grins before he begins to talk.

"well Alex, it's nice to meet you- and I'm glad to see that Treecko likes you a lot already. Either way, I've had a couple of other trainers come through here, and I've got some tests to run, but pretty much, we are going to travel to Route 101 for a bit. However, my healing machine is on the fritz, but anyway, once you pick up those items, and the PokéDex on the table we can move on.

Alex looks around before noticing that a Town Map, Revive, 2 Potions, 2 Full Heals and 3 Oran Berries lay on the table behind him.

Similar topics
» The adventure REALLY begins.
» And so the journey officially begins...
» The Story Begins, a Team and thee.
» The Lad Rad's Adventure
» And so the adventure begi-- wait, who's that?